Some 400 bikes will be provided in the inner-city areas and some 2,000 in suburban areas. The project is to be completed before the Hue Festival 2020 in April, which is one of the biggest tourism events in the country.

Visitors need to install an app on their smartphone to access the service by using QR codes to unlock the bikes as well as utilize GPS to locate them. The service will provide visitors an alternative way to travel along the Huong (Perfume) River in the town’s center and other local tourist spots.

Earlier this year, ancient town Hoi An in the central Quang Nam Province launched a pilot bicycle sharing program to encourage residents and tourists to move from petrol power to pedal power.

Discovering Hue by bicycle is a new tourism trend favored by both domestic and foreign visitors, according to a survey conducted by the Hue People’s Committee. The new service provides them with more options in addition to electric buses or boat rides along the river.

It also aims to help reduce emissions from motor vehicles and create a green and smart image for the town, local authorities said.

Hue also plans to open more pedestrian malls to the north and south of the Huong River, develop means of public transport, and launch environmentally-friendly toilets and bins.

The capital of Thua Thien-Hue Province, a major tourist attraction in central Vietnam, stands out from other parts of the country with its Imperial Citadel and royal tombs.

Thua Thien-Hue received more than 4.3 million visitors last year, up 14 percent year-on-year, and among them were 2.2 million foreigners. Visitors from South Korea made up the largest group, accounting for a third of the total foreign arrivals.

Da Nang City in central Vietnam last June also announced its plan to pilot a public bicycle service with hundreds of bikes to be installed on its downtown streets to combat traffic jams. The timeline for this plan to be executed is still unknown. 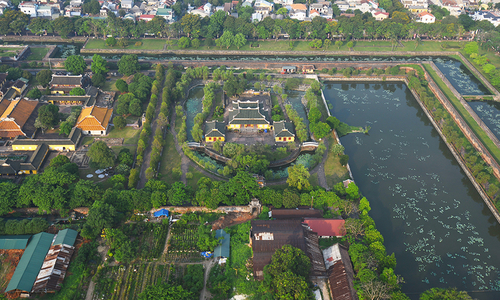 Hue from above: Bird view of Vietnam’s former capital Hue under the Nguyen Dynasty

Vietnam readies for first ever kayak race in the northern highlands

Administrator - 15 February, 2020
0
An 18 kilometer kayaking race on the Mien River next month aims to add excitement to the stunning landscape of Vietnam's northern highlands.

Drunk driving thrives in Vietnam because few pay the price

Administrator - 13 February, 2020
0
Typically, law enforcement and self-discipline would ensure people do not drive under the influence. Vietnam’s not typical.

Administrator - 13 February, 2020
0
Hordes of Vietnamese are flocking to Saigon's Tan Son Nhat International Airport to welcome loved ones from overseas for the Lunar New Year.