The concert, marking the 25th anniversary of her career, was held at the City National Grove of Anaheim in California.

Thao performed lively, energetic songs, showing her versatility. Over the last 25 years, she has challenged herself by performing various genres of music, from pop, dance to bolero (romantic music). The concert was also an occasion for her to show off 20 custom-made costumes.

Thao puts a lot of effort in the live show, showing high-standard performance techniques. She also invites the artists who were top singers in the 1990s.

She also performed Yeu Mai Ngan Nam (Love For A Thousand Year) with Dan Truong, her close friend and colleague.

She said she had not been able to sleep for many nights, stressed out over the organizational tasks, from choosing the songs to stage design. In the event, she and her support team pulled it off. Her strong and stable voice did not falter throughout the show.

The 4-hour show depicted Thao’s singing career with a storyline. When she started, she had two mentors who helped her become a household name in Vietnam – show organizer Duy Ngoc and music composer Duc Tri.

At the end of the show, Thanh Thao and her collaborators together sang composer Duc Huy’s song Va Con Tim Da Vui Tro Lai (And The Heart Is Happy Again).

After the show, many fans lingered to present flowers to Thao and take photos with the artist. Actor Duc Tien, who was in the audience, said that he liked the stage setting by director Tran Vi My as well as the sound system directed by conductor Tran Nhat Minh.

“I was surprised that more than 1,500 fans stayed until the end of the program to share their feelings with Thanh Thao and the guest singers,” Tien said. “It brought back many memories of Vietnamese music of the past.” 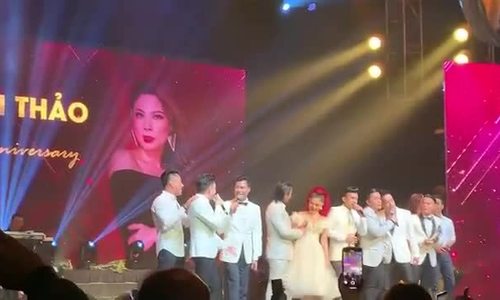 Administrator - 14 February, 2020
0
At Da Le Chanh village in Thua Thien Hue Province, a flower farm is lit up at night to regulate the plants' growth rate.

Administrator - 18 February, 2020
0
Up to 400,000 people visited the eighth Hue Traditional Craft Festival in the central province of Thua Thien-Hue from April 27-May 1, showing a 2.3-fold rise over the previous edition in 2017, according to the organisers.

Administrator - 13 February, 2020
0
A few days ago I took my child through the gates of a beautiful school for a new chapter in his life: first grade.

Administrator - 17 February, 2020
0
The European Parliament has ratified the EVFTA and the EVIPA. The ratification has opened up new horizons for more intensive, comprehensive and effective bilateral cooperation 30 years after the establishment of diplomatic ties.