Donald Trump is just the latest U.S. president in a long list of commanders-in-chief who have failed to find a way to deal with North Korea. In the 1960’s and 1970’s, the central goal was preventing North Korean founder Kim Il Sung from redeploying his army south of the 38th parallel. For the last 25 years, however, the focus of U.S. policymakers has been something even more difficult: the denuclearization of the Kim dynasty.

Pyongyang’s two intercontinental ballistic missile tests in July, its testing of a Hwasong-12 missile over Japan in August, and the September 3 test of what Pyongyang claimed was a hydrogen bomb have only accelerated the sense of urgency in Washington, Seoul, and Tokyo about the need for a strong collective response.

The U.S. foreign policy community has many recommendations on the table but few easy answers. A preventive military strike is not plausible given its devastating cost – Brigadier General Rob Givens (retired) estimates that 20,000 people would perish in Seoul in the first day of a conflict. Even though the U.N. Security Council voted Monday to step up sanctions against Pyongyang, economic restrictions have limited impact. Pyongyang is a master of sanctions evasion, devising ever new and effective ways to keep their weapons programs funded.

What may work, however, is a new U.S. approach that learns from its failures – as well as its successes during the Cold War – while tempering expectations on what can be achieved.

The Kim dynasty has long sought recognition as a nuclear weapons state, a demand that would be a political minefield for even the most popular U.S. president to meet. But North Korea is a nuclear state whether Washington offers formal recognition or not. The only way for the U.S. to improve its North Korea policy is by acknowledging that Pyongyang will be nuclear-capable for many years to come and is highly unlikely to eliminate its nuclear weapons program regardless of what Washington offers. This isn’t about what Kim Jong Un wants, but rather what is most likely to serve U.S. national security.

While openly recognizing North Korea as a nuclear power would cause tremors throughout Asia, Trump ought to do it anyway. As soon as he does, the U.S. can re-focus attention from a denuclearization objective that is increasingly impossible to imagine toward an old-fashioned strategy of deterrence and containment. “We know how to contain and degrade enemies who want to do us harm,” Harry Kazianis of the Center for the National Interest told me. “We just need to open a history book and reread what works and apply it for the 21st century.”

For Washington, deterrence and containment would mean building an anti-North Korea alliance of diverse states in and outside the region with the common objective of minimizing Pyongyang’s ability to threaten its neighbors. As former State Department official Richard Sokolsky told me in an email: “If we could deter the likes of Stalin and Mao, we can do the same with Kim.”

As politically risky as this decision would be, effective deterrence would require Trump to establish a reliable channel of communication with the North – similar to the U.S.-Soviet and U.S.-China hotlines during the Cold War – in order to clear up misunderstandings that will inevitably arise and to deliver a unified message of what Washington will tolerate. The signal to the leadership in Pyongyang should be as unambiguous as possible: while Washington does not seek an armed conflict with the North, the U.S. military will respond to any provocation that dangerously impacts the interests of the U.S. or its allies. The message would aim to trade coexistence between the U.S. and North Korea for as long as Kim Jong Un refrains from launching an attack against his neighbors. Given Kim’s preoccupation with self-preservation – there is no evidence to date he is bent on suicidal self-destruction – this arrangement may be pragmatic enough for the young dictator to explore.

Because the Kim dynasty has been accused of exporting and cooperating with countries like Iran and Syria on nuclear designs, missile technology, and possibly chemical weapons development, the Security Council ought to deliver a similar message to Pyongyang that a continuation of this behavior would be grounds for an even tougher and more comprehensive boycott of what it can import and export.

While China remains resistant to cutting off all oil imports to the North or squeezing its economy to the point of collapse, Washington may be willing to enlist Beijing’s help in areas where Beijing is more likely to agree, such as preventing the proliferation of dual use nuclear and missile technology transiting North Korean territory. Stemming the flow of these materials would minimize the spread of weapons of dangerous items to other proliferators, an objective that the Chinese appear to share.

Washington also needs to encourage a stronger South Korea-Japan relationship. Historical rivalries between these two states cannot obstruct the regional intelligence sharing essential to promoting a unity of purpose in East Asia. The Trump administration needs to spend far more diplomatic capital on alliance-building than it has to date. Open talk about scrapping the free trade agreement only destabilizes the kinds of partnerships that form the bedrock of an anti-Pyongyang alliance. Washington can and should allow the South Koreans to take more responsibility for its external defense, but it can do so without giving Pyongyang a reason to believe that its nuclear development is causing divisions among its adversaries.

Conflict management is not the most ideal scenario for U.S. policymakers, but it may be the only prudent choice we have left.

*Daniel R. DePetris is a fellow at Defense Priorities. The opinions expressed here are his own. 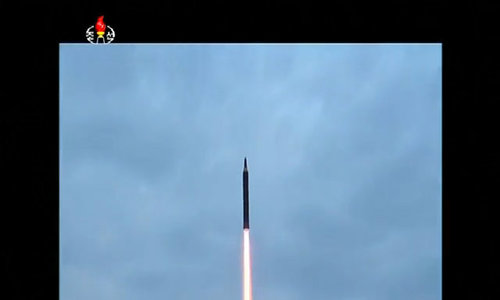 The least bad way for Trump to deal with North Korea

North Korea vows to wipe its enemies off the map

In downtown Hanoi, some old apartments are ticking time bombs

Administrator - 13 February, 2020
0
An ancient apartment block in downtown Hanoi looks like it might collapse any time, but its occupants just live with the risk.

Hoi An appeals to the ‘sole’ in pedestrianization drive

Administrator - 14 February, 2020
0
The ancient town of Hoi An will introduce yet another pedestrian zone in a bid to become 'a town of cyclists'.

Administrator - 18 February, 2020
0
Located on a small alley off Hang Tre Street in Hanoi’s Old Quarter, 95 per cent of the items at the Hidden Gem Coffee have been recycled.